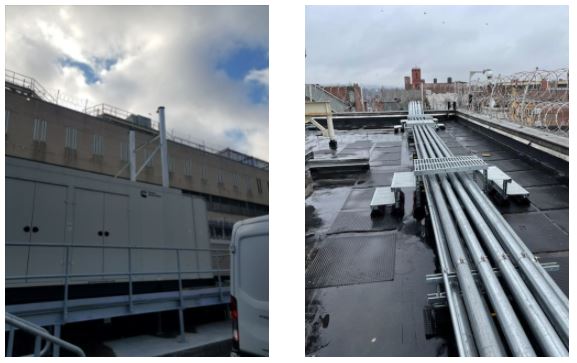 COUNTY CORRECTIONS FACILITY – EMERGENCY GENERATOR SYSTEM UPGRADE – ENGINEERING, DESIGN, AND IMPLEMENTATION
To demonstrate the diversity of ATI’s experience and capabilities, this month we will be profiling one of our recently completed emergency generator project designs for a County Corrections Facility.

The project was developed to replace (3) existing, isolated emergency generators in separate wings of the facility that were past their useful life, with (1) new, diesel-fired, outdoor emergency unit. The system provided consolidation of the separate systems as well as providing additional capacity for loads not included in the current distribution. The facility is a four-story building that was constructed over multiple years and sections. In addition to the inmate housing, the facility has functions for administrative/sheriff’s offices, intake, kitchen/dining, vehicle maintenance, forensic lab, classrooms, laundry, and chapel.

The project involved an electrical design that included a new outdoor, 800 kW generator rated for 208Y/120V. The system included a sound attenuated, weather-proof enclosure mounted on steel dunnage, with a diesel sub-base tank for 48 hours of supply. The outdoor installation also included a new generator switchgear which provides distribution transfer switches in the different sections of the building. Each distribution was provided with separate metering for load trending and monitoring through a central automation panel in the switchgear, which also monitored status on the transfer switches.

The generator also involved a structural design for a new dunnage platform that housed the generator as well as the outdoor switchgear. The design involved new foundations for a considerably large platform to ensure all service clearances were met. Since the platform was 3 feet above grade, it required railings and stairs as well.

A second portable engine connection box was installed and interlocked to a separate building 480Y/277V electrical incoming service which is dedicated to powering the facilities rooftop air handler units and chillers. Adding this load to the permanent 208Y/120V generator was not feasible due to the higher voltage and added transformers required to be included, plus increased in genset unit size with the space available on site. The second portable connection alleviated the County’s concern of having a method of cooling the building, should a power outage prolong during the hot summer days.

One of the main challenges of the project was the logistics of routing new emergency feeders and distribution centers throughout the corrections facility. In addition to the challenges of working within the building around inmates, there was very limited space to route large conduit feeders to serve each of the areas. Therefore, much of the primary feeders had to be located on the exterior of the building, which required large vertical and horizontal duct-bank runs. This also presented a challenge of supporting the runs and re-installing the razor wire to ensure security measures.

As would be expected, the project had to be phased to mitigate interruptions which required the project to be constructed within (4) different phases. For each of the phases, this involved installing a portable generator with duplicate emergency feeds, while loads within the respective section of the building were swung over to the new equipment. Once everything was swung over to the new equipment, the respective temporary feeders were removed.

Another challenge was developing the short circuit and coordination evaluation. The study required the existing conditions to be thoroughly documented in a detailed collaboration with the contractor. The effort also required physical cable lengths and information on existing equipment that was original to the building. This was imperative to ensure selective coordination on both the over-current and ground fault elements of the distribution system. These studies also included the requisite analysis and labeling of the new equipment for the personal protection equipment based on the incident energy at each distribution point.

The project involved an overdue upgrade to the existing emergency power system. Furthermore, the County procured a federal grant that facilitated the implementation of the project. The project provided a more reliable source of emergency power with capacity for future optional loads as well as contingency provisions through a portable engine capability. Careful planning went into ensuring that a successful project was delivered under the grant budget and schedule constraints. As with any renovation project, field changes were encountered, but these changes were addressed with proper engineering involvement which ensured that the project approach was maintained, and a successful project delivery was provided.

Chewing Electrical Cords
I caught my son chewing on electrical cords…
So I had to ground him…
He’s doing better currently…
And conducting himself properly.

Equipment Sale
Anyone want to buy some exercise equipment?
I’m having a going-out-of-fitness sale.

Not That Kind of Bar
One Saturday evening a man walked into a bar and said, “Excuse me, I would like a pint of beer.” The bartender served the man his drink and said, “That will be four dollars.” The customer pulled out a twenty-dollar bill and handed it to the bartender.
“Sorry, sir,” the bartender said, “but I can’t accept that.”
So the man pulls out a ten-dollar bill, and the bartender rejects his money again. “What’s going on here?” the puzzled man asked the barkeep.
Pointing to a neon sign behind the bar, the bartender explained, “This is a Singles Bar.”

Get Well Soon
A motorcycle cop was rushed to the hospital with an inflamed appendix.
The doctors operated and advised him that all was well. However, the patrolman kept feeling something pulling at the hairs on his chest. Worried that it might be a second surgery the doctors hadn’t told him about, he finally got enough energy to pull his hospital gown down enough so he could look at what was making him so uncomfortable.
Taped firmly across his hairy chest were three wide strips of adhesive tape, the ultra sticky kind. Written in large black letters was the sentence, “Get well soon! Luv, from the nurse you gave a ticket to last week!”