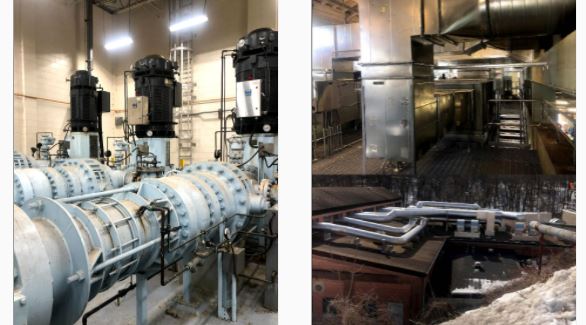 To demonstrate the diversity of ATI’s experience and capabilities, this month we will be profiling one of our project designs that was recently brought to substantial completion.

The project we are profiling was for a major water utility that involved the design and implementation of the upgrade of three (3) 1,000 horsepower and one (1) 700 horsepower medium voltage Variable Frequency Drive (VFD) systems with customized medium voltage switchgear. The equipment serves a major 35 million-gallon-per-day potable water pumping facility in northern New Jersey.

The core electrical design involved the installation of new 2,400V VFDs along with respective customized switchgear arrangements for serving existing remote water distribution pumps. Due to existing site restrictions, existing underground power and control conductor conduit and raceway systems needed to be reutilized. This involved very careful coordination and attention to detail with respect to the equipment layout. New switchgear was fed from an existing upstream double-ended switchgear assembly with kirk-key interlocks. New VFD switchgear was designed to afford simplicity during future VFD replacement efforts. Because the configuration of the new equipment differed from what was existing, to avoid major impact to the existing concrete floor, and to minimize dirt and dust infiltration into existing active VFD equipment, a structural plinth and wireway system was designed and incorporated beneath the VFD equipment enclosures to facilitate routing of both medium voltage and low voltage conductors at the bottom of the new equipment without the need to penetrate the existing finished concrete floor. Customized switchgear crown boxes were designed to facilitate a neat and efficient means to route medium voltage conductors along the top of the new equipment. Temporary medium voltage feeder circuits were designed to facilitate a phased approach for upgrading the four (4) VFD systems, therefore enabling the facility to maintain adequate flowrates and remain in service throughout the duration of construction.

The modification of an existing 480V Motor Control Center was designed to supply power to new HVAC equipment and miscellaneous general and control system load. The electrical design included both ambient and emergency lighting as well as new instrumentation and control panels for integration of the new VFD and HVAC systems with existing instrumentation, control, and SCADA facilities.

Important considerations affecting the selection and specification of the new medium voltage VFD drive equipment included the possible implications associated with the effects of power surge, voltage reflection, harmonics, and other power quality anomalies that the new VFD equipment could be exposed to or impress upon extraneous electrical equipment such as existing motors, bearings, and new cable systems etc.. Such effects were addressed via the incorporation of 24-pulse drive systems with adequately-rated and integrated surge protection devices, drive isolation transformers, and drive output sine wave filtering equipment. The VFD and switchgear equipment was specified and provided with safety options for promoting safe maintenance practices. Some of the major safety options provided included on-board grounding switches to drain stored energy from VFD equipment, adequate cubicle interlocking to eliminate the unintentional exposure of live parts when working on the switchgear and-or VFD equipment, and windowed portals within the switchgear equipment to reduce risk of arc-flash and electrocution when performing periodic inspection or infrared scanning of the interior of the switchgear equipment.

One of the major project challenges was developing sensible methods for providing system monitoring, control, and alarm sequences specific to the water utility’s operational needs. The subject pumping system served multiple water distribution system headers and needed to be designed to operate based on system flow and-or pressure tracking algorithms. These control methods monitored critical system parameters and modulated pump speeds accordingly through the use of programmable logic controller equipment respective to each motor-pump-VFD set. VFD and HVAC equipment included both local and remote-control and monitoring capabilities. Pilot devices local to the VFD equipment were provided to allow local control of the pumping equipment. In addition, basic system models were created and programmed into local and remote graphic operator-interface screens to enable operating personnel complete remote control and monitoring of the pumping and HVAC systems.

In Addition to this project, there were upgrades being performed at another adjacent main pumping station facility on the same property. Therefore, frequent field observation, coordination, and communication between project crews was required in order to minimize project conflicts, and to ensure a timely, efficient, and successful delivery of the project.

In support of the new mechanical equipment mezzanine platform, a new architectural and structural design was developed for providing a 2,000 square-foot equipment space for locating the four (4) new 10,000 CFM make-up air units, and one (1) 5,000 CFM HVAC air handling unit. The design involved carefully coordinated floor, wall, and roof penetrations for routing and terminating associated air distribution ductwork, as well as for routing and terminating equipment combustion air intake and exhaust flues. The new mechanical equipment mezzanine platform structure included new stairs, landings, and railings. All equipment was finished with materials suitable for the environmental conditions for which it was installed.

This project involved the upgrade of major electrical equipment infrastructure which was highly critical to the overall operation this water utility’s treatment plant and pumping distribution systems. The project required extensive coordination with a multi-disciplined design team, the utility’s operational team, and multiple contracting entities. Key factors contributing to the successful delivery of this project was a strong fundamental understanding the systems at hand, thorough field survey, diligent engineering/design practices, and high-level, highly-attentive engineering field support services. As with most multifaceted projects, field changes were encountered, however they were minor and kept to a minimum. All field changes were carefully vetted with the Owner and Contractor. A solid team approach with open paths of communication ensured that all project challenges were met and overcome with all operational and functional parameters maintained, making this project a proud success for all involved.

Owner Testimonial:
“I am glad to have had the opportunity to work with ATI on this project. Every step of the way, from concept to design and throughout construction, ATI has always brought our best interest to the table. I cannot be more pleased with the delivery of this project.”
Joseph A. Bella, Executive Director

Great Job Danny
“Danny,” began Mrs. Waters, “what’s usually used as a conductor of electricity?”
“Why- er…”
“Correct, wire. Now tell me, what is the unit of electrical power?”
“The what???”
That’s absolutely right. The watt.”

The Terrible Golfer
Once a terrible golfer hit a ball onto an ant hill. He went over the ant hill to hit the ball. No matter how hard he tried, all the golfer managed to do was to hit the ant hill and kill many ants.
At last, only two ants remained. One turned to the other and said, “If we want to stay alive, we’d better get on the ball!”

New Principal
As a new school principal, Mr. Mitchell was checking over his school on the first day.
Passing the stockroom, he was startled to see the door wide open and teachers bustling in and out, carrying off books and supplies in preparation for the arrival of students the next day. The school where he had been at previously had used a check-out system only slightly less elaborate than that at Fort Knox.
Cautiously, he asked the school’s long time custodian, “Do you think it’s wise to keep the stock room unlocked and to let the teachers take things without requisitions?”
The Custodian looked at him gravely… “We trust them with the children, don’t we?”

One Cup Every Morning
I have one cup of coffee every morning to start the day off right…
The other ones are to keep me out of jail, help me form sentences, and fuel my razor sharp wit!